The Broken Egg on Clark Road is one of the region’s favorite eateries.

It’s changing its name—but that’s all.

(Sarasota, FL) The Broken Egg on Clark Road is hatching a new name—The Original Egg. Fans of the wildly popular breakfast and lunch eatery needn’t be concerned. Dawn Hair, the restaurant’s owner, says their eye-opening recipes, comfortable ambiance and outstanding service will stay the same.
"Aside from the new name, we’re keeping everything we stand for,” she says. “It’s worked perfectly for the last 20 years, why change it?"
But why change the name in the first place?
“It boils down to legal issues,” says Hair. “I don’t own the name anymore. A corporation does.”
Hair explains that Bob Kirscher, the beloved original owner of the three area Broken Egg restaurants, sold all three of his venues in 2013. Hair bought the Clark Road location, after managing it for many years. Kirscher sold the other two branches to the Louisiana-based Double R Restaurant Group, the largest franchisee of Another Broken Egg Cafes, with locations in Louisiana, Georgia, South Carolina and North Carolina. The corporation also bought the “Broken Egg” name—and exclusive licensing rights.
"The corporation gave me two years to make a decision,” says Hair. “After that, I could become a franchise of Another Broken Egg and pay the company a two-percent royalty fee. Or I could change the name.”
Hair loved the previous name—and so did her customers. But the royalty fee was a big bite. More importantly, she didn’t want corporate restrictions, guidelines and oversight. As the restaurant’s new name implies, Hair is a true original.
“I love being unique,” she says. “My management style is the opposite of corporate. Being happy is much more important.” Hair describes herself as a hands-on owner who learned from the best—Bob Kirscher. “He taught all of us how to treat staff with respect,” she says. “We’re like family here—and I think that explains the low staff turnover. Our staff loves working here, and our customers love them.”
Hair speaks glowingly of Bob Kirscher, who bought the first Broken Egg in the mid-1990s. Hair began working with him in 2006, assisting with the launches of two new branches. Kirscher offered her a stake in the Clark Road location when he opened it in the mid-1990s. Hair bought the restaurant in November, 2013.
"Bob promised me first option on the sale of the Clark Road restaurant if he ever retired,” says Hair. “He honored that promise—and my dream of becoming a restaurant owner came true.”
Hair had cherished that dream for a long time—but not always in the form of a breakfast/lunch venue. “Everything turned out perfectly,” she says. “My two children come home from school every afternoon. I need to be there for them. Staying open for dinner just isn’t an option.”
She adds that her teenage son and daughter are already following in her footsteps. “My daughter is a hostess and cashier and my son helps with bussing on the weekends,” she says. “They both help out on weekends and holidays. The family stays together and they love it!”
Bottom line?
"Our name is new, but that’s all,” says Hair. “We’re keeping our philosophy, our friendliness, our egg-shaped menu and everything in it—especially our incredible hash browns.”
She adds that she worked with Think Donson, a boutique marketing agency based in Sarasota, for all aspects of the company's rebranding, including a new logo, website and signage.
The Original Egg is located at 4031 Clark Road, Sarasota; 941-922-2868; theoriginalegg.com.
Tags:
Broken Egg Restaurant Sarasota Breakfast Lunch Sarasota Restaurant
January 2016 Newsletter
December 2015 Newsletter

Easter Specials include Lobster Benedict at The Broken Egg!

MIMOSA now available with your breakfast or lunch at The Broken Egg ... Enjoy!

By accepting you will be accessing a service provided by a third-party external to https://www.theoriginalegg.com/ 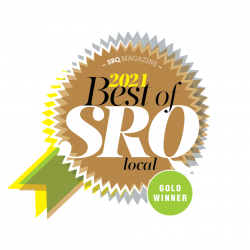